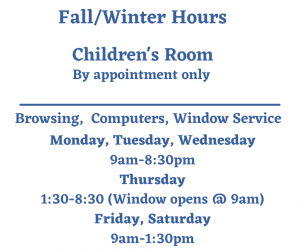 **Children’s Room: by appointment only** Click here to make one.

By Car From Boston:
Take Route 1 North, over the Tobin bridge to Route 16 (Revere Beach, Lynn exit). Follow Route 16 to Bell Circle. At Bell Circle follow the signs for Route 1A North. Continue on Route 1A North past the Wonderland dogtrack, through Revere, along the marshes, over the General Edwards bridge, and down the Lynnway. Eventually, you will see signs indicating that in order to stay on Route 1A North, you must take a left at a set of traffic lights. Do not go left–go straight through the traffic light. Shortly, you will come to the Nahant rotary. Go 3/4 of the way around and follow Lynn Shore Drive along the coast. At the tall monument (just after you enter Swampscott), make a sharp left turn onto Burrill Street. The library is the first building on the right.

By Car From Route 128:
From 129 northbound take exit 63B or from 128 southbound take exit 63 and follow Rt. 129 East through Lynn. At the junction of Route 129 and Route 129A, stay to the left, following Route 129A East towards Swampscott. Shortly following will be the junction of Route 129A and Route 107. Take a left at this traffic light onto Route 107 North/129A East. Keep following signs for Route 129A East. Eventually, you will come to an intersection where you can just barely see the ocean straight ahead. This is the intersection of Route 129A and Route 1A (also called New Ocean Street). Take a left at this traffic light, heading north on Route 1A. At the next traffic light, take a right onto Burrill Street. The library is on the left just past the police and fire stations.

By Commuter Rail:
Take the Newburyport/Rockport Line to the Swampscott station. This is the intersection of Burrill Street and Railroad Avenue. Follow Burrill Street 3 blocks south where it intersects with Rt. 1A/Paradise Road (there is a full set of traffic lights at this intersection). Continue south on Burrill Street, passing the Police and Fire stations on your right. The library is located at 61 Burrill Street on the left side.

By Bus:
Take bus 441/442 or 448/449 to Phillips Beach via Humphrey. Follow Burrill Street north so that you pass the tall monument on your left. The Swampscott Public Library is the first building on the right at 61 Burrill Street.

Parking
Parking is permitted in the lot behind Town Hall and the Library after 4:30 pm and on Saturdays. Street parking is available along Burrill St.